Remember those college days and partying during Fraternity RUSH season?  It was a non-stop party-hardy weekend of long nights, groggy mornings, throwing books around while "studying" and then getting ready to do it all again!

New job, long commute, going back to school, homework... You see, I add to my life, pushing all the bits around and squeezing all this newness in while juggling to keep all the wonderful old things going strong.  It works for the most part because all the "free-time" is pushed aside to allow for all the newness to become old.  One might use the term Coping to define what is this juggling act called life has become.

Her Greyness is coming along nicely.  I am finally getting decent 20 meter circles at a canter and more frequently she can be asked to move between compressed (note no mention of collection) and lengthening with losing balance.  I smile more than sigh in frustration at my lack of skill working with a green horse. 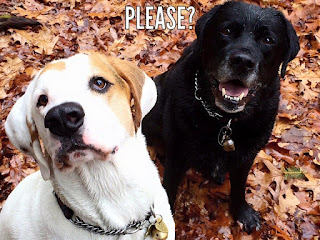 Da Boyz are happy and are enjoying their short but active runs before dawn.  They are healthy, well fed and loved.  I smile and cuddle in moments of peace.

Moments squeezed between the rush of life and the rush of new things.  More moments are spent rushing to be sure that everything gets done and all is well in everyone's life.

Did they get enough exercise?  Is there a stiffness in her hind end?  Did I loosen her body up enough?  Did Da Boyz get enough mental stimulation?  When should I fit in ear cleaning and clipping toes? Squeezing moments to make it all ok.

It occurred to me that maybe I need to add a bit of a pause between the rush of life.  What would that feel like? What if I treasured the moment as if there will be no moments after that one?  What if this moment was the best moment ever?  Would I even know?

The Buddhist call it, The Sacred Pause*.  Stopping the Rush, pausing to empty the cup that is overflowing, breathing in life and then allowing the cup to fill again.

Last night, while rushing into the barn to change into my riding clothes, thinking about what to have for dinner, wondering what I should wear to work tomorrow and hoping that the dogs had a late afternoon romp with the dog walker, I paused.

And, I smiled, time to enjoy my life.  Coping is just not good enough!

Posted by Suzanne at 2:04 PM No comments:

Email ThisBlogThis!Share to TwitterShare to FacebookShare to Pinterest
Labels: About Me, Life

As a therapist, my sister was taught to look at a patient's nails and teeth during their first consultation.  Healthy, well balanced folks generally have good oral health and clean, neat fingernails.  Self care IS a sign of good mental health.

Maisy's feet are well manicured and her shoes cost a mere $250 every 5-6 weeks.  Her dentist declared her teeth healthy, well cared for and in very good shape.  A chiropractor adjusts her working body and I love to groom her grey coat until it radiates a silvery shine.

If measured by the same criteria, I am not!

Oh, I score high in the oral health scale.  I thank genetics, regular brushing and fluoride treated water from my youth for that.  My nails?  Um, not so much!

I was driving Ms Maisy (yes, I was) and happened to look down at my hands and... gasped.  My nail beds are cracked and dry and my nails are brittle and chipped.  I have become the dog/horse version of a Cat Lady.

What is it about us horse girls that focus so intently on the health of our partners and yet, can not seem to find the time to prioritize our health as critically?

And, sometimes when I look down on broken nails and dry cracked cuticles, I remember that Maisy's person is ME!   Maybe I should hire ME to take care of me just as well as I take care of Her Greyness....

Email ThisBlogThis!Share to TwitterShare to FacebookShare to Pinterest
Labels: Care

"Suzanne is returning to her lil' pinto pony and Da Boys filled with life... And, maybe looking for a hug! Thanks Kripalu!" Facebook status - March 1, 2015 2:05pm

"Suzanne is still feeling the love and making plans... A girl's gotta smile and have an adventure in the wings... Let's do that thang!" Facebook status - March 1, 2015 9:09pm

Two Facebook statuses... I just returned from a yoga and meditation retreat, one I do every time I'm either going through or preparing for a life event.  I was waiting for the written confirmation of a job offer I had verbally accepted, just two weeks away from Area 1's Opening Day and I was heading to  to a fabulous Showcation to be with family, play with my snowbird friends and cheer on riders tackling big jumps in central Florida.

Forty-eight hours later, Sugar would be euthanized and I would read an email telling me that the job offer was being rescinded due to a corporate restructuring.  It wasn't the best day.  Actually, it was kind of an awful day.

A Wise Man (also a pretty decent plumber) told me that "you have to have some distance to understand the "why" in life.  You see, as a plumber when I lay a pipe, I have to step way back away from that pipe to see if its straight.  And, when I give it some space, there is an understanding on what I need to do next.  And that comes from having the distance."

Sometimes, you just have to have faith and believe that everything will be ok.  And, then allow the love of good friends (and maybe a cuddly hound and an eager, helpful Lab) carry you when the ache feels so raw that you can not believe you won't hurt any more.

There is this energy that we all possess and, I think its called hope or maybe, dreams.  It is an energy that is always there even if it's a flicker easily pushed around by fear.  It grows strong when you reach out to friends and you accept the loving energy surrounding you.  It is within you.  And, you gotta look, really look, for the goodness in a life that seems in holding pattern.

And then time passes, friends are still fabulous and they still listen to my stories.  (Heck, eventers will tell you the same story of an event that happened three years ago and we all still listen.)  And, the good ones don't judge.

One year later you're still cuddling with the hound and the lab is still raiding your laundry to bring you dirty socks.  And, one year later, you're kind of bitching about your long commute to the wonderful, even better, job that you started in January.

And, one year later, you groomed your fancy, sweet and spook free grey pony dreaming of the summer's events and, yet whining just a little bit because your ride wasn't as light, as round or as easy as the one you had last week.

And, you smile...  one year later... Life is different and it is soooo good!  Thanks for being there on this crazy ride called living.
Posted by Suzanne at 11:44 AM 3 comments: