Sometimes you get bored...  the same indoor working on the "same" things with the same three jumps just sitting there.   Sometimes... so I use my iPhone to ride to the music, letting the tempo of the song just take the gait.  It works... and, so does the timer assuring that I make it to 45 minutes.

Today was a joy...  I got to chat with friend for just a bit as she finished her ride and I warmed up into mine.  Then I was alone again...  working on light and fluffy, more bend, more hind end, up-up-up, and {{{sigh}}} working on improving MY canter transitions (if you ask correctly Sug gives them correctly).  Kind of our... blah, blah, blah.

Then the Defiant Mare entered the indoor...  or should I say -- the Angry Mare's domain!  The Defiant Mare knew that another Alpha was in her presence.  She became magnificent ... bigger than her 16+hands... her coat was black as night and so shiny that she would not be missed.  Her day was long-lining with the Master...  yet, she would not let the Angry Mare think that she was not in charge.

The Angry Mare became a ball of fire under me.  Her trot got loftier and more forward.  It was exhilerating...  The two of them were separated by the line of jumps but they knew every step each took.

I was feeling strong and powerful myself...  who wouldn't feel the same riding that much power.  I decided to challenge my riding and her attention by going "large".  As we approached, the Defiant Mare looked at her - right in the eye.


OOOO...  that made Sugar so angry.  Like a three year old child,  she stomped, tried to spin, switched leads three times and I rode it out.
It was fabulous... and kind of funny!  Mares - sometimes you hate them but damn, you gotta love them!
Posted by Suzanne at 6:59 PM No comments:

Email ThisBlogThis!Share to TwitterShare to FacebookShare to Pinterest
Labels: Horse

GETTING TO MY INNER COWGIRL!

Once upon a time, I called myself a Weenie Rider.  You know, not too scared, not really brave but willing to do what I was told to do but never bold enough to push my edge.  I secretly dreamed of going Training but whimpered like a newborn baby walking my first Novice course of the 2010 season.

And when I agonized over the dreaded barrels walking the stadium course, my trainer turned to me and whipped me verbally, "I don't want to hear one more word about those barrels.  JUST JUMP THEM!"  I sighed, kept my mouth shut and confirmed, I am a Weenie Rider!
It hit me one day, if I defined myself as a Weenie Rider, then in fact, I would always be a Weenie...  So, I worked hard on the head and with my trainer on my horse/rider connection.  I dropped Weenie and any of the other words that held me back (wimp, scared, worried, etc).
It took a long distance eventing buddy to point out that, I used similar terms when describing my Princess/Diva.  She's hard to ride, difficult, spooky...  blah, blah, blah.  I changed the way I spoke about her... Sugar became exhilarating, exuberant, exciting!
Self-Talk is self-fulfilling.   Changing the way I thought about myself put me on the direct path to getting to my Inner Cowgirl!  Not being a cowgirl but becoming a living fire breathing, gun totin' cowgirl on a pinto pony!

Foxhunting sealed the deal (more on that some other time)!  My inner cowgirl rules! 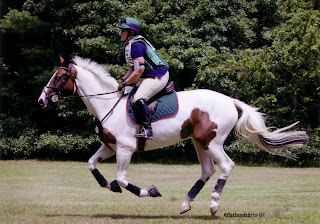 I DON'T WANT TO BE A WHINER! 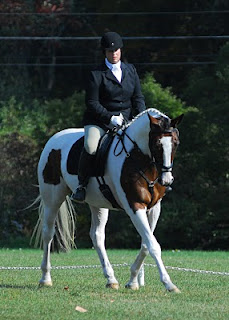 Dressage is supposed to be elegant, sophisticated... a dance between horse and rider. And, for me, it is my "easy" phase... the one I should excel at!
Yet, when the going gets tough - I can't get the left bend or I'm hanging on the left rein or we're careening down to a tight spinning circle trying to get Sug to let go - I whine. I so don't want to be a whiner, but there I am. "This is hard!" "I don't like it!" "We suck!" "I CAN'T DO THIS!"
Tonight, I was told, not to suck it up, but that I am focusing on the problem and all that is wrong with the ride. In order for us to become free of the problem, I needed to focus entirely on what was right and what I wanted the ride to be!
It was the equivalent of a tap of the crop on my brain. RIGHT, yes you're right! I needed to think and feel the bend, the evenness of her body under mine and the strength in her hind end. That and only that should be the focus of the ride.
And, really? The lesson... really, was a lesson for life!
And, the whining... {{{{sigh}}}} I hate it!
Photo credit - http://www.dexterpix.com/
Posted by Suzanne at 10:27 PM No comments: 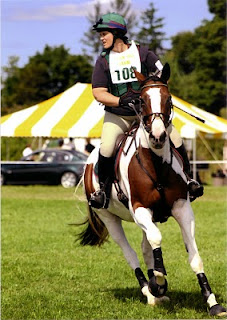 This is the time of the year where our dreams run wild... the Winter Omnibus is here and I get to plan a season.... MY season!

Someone said once that "we make plans and God laughs at them"! I soooo don't subscribe to that rule. I believe that dreams turn into goals and goals lead us to paths and paths cover a journey. Sometimes the path isn't what we planned but, with time, it led us to a different and sometimes awesome place...

I had so many plans last year which got kind of twisted... I orchestrated life events so I could achieve the perfect goal to finally ride at Groton House Farm (GHF)Horse Trials. I bid aggressively at the Area 1 Silent Auction... and finally won the bid by cutting a side deal with a mother whose daughter wanted to compete at GMHA. It was awesome! The elation carried me through the winter.

Then, Sugar... uh... fractured her splint bone five days before GHF and was out of commission for 8 weeks.... No Groton House, no Fitches Corner, no Millbrook... Still, I was very happy that I had a jumping horse at the end of her recuperation period.

So, the OMNIBUS IS HERE! I am thrilled to be at it again. A large Dunkin' sits next to me, a highlighter in one hand, a calendar in the other... which events? When? And, the neatest issue... WHERE do I move up? And when?

Of course, by the end of foxhunting season last year, I had embraced my inner cowgirl so much that she was running the show.... let's run, let's jump... let's GO! I was sooo ready for a move up that I am sure my trainers shivered just a lil' bit at my cockiness.

I still have plans to move up this season... but my inner cowgirl is taking a long nap, maybe even hibernating... But, I found her and will not EVER forget that brazen ... yee haw... time!!!!

So excited! THE OMNIBUS IS HERE! Let the planning begin! And dream on....
Posted by Suzanne at 5:16 PM No comments:

Email ThisBlogThis!Share to TwitterShare to FacebookShare to Pinterest
Labels: Showing

WINTER JUMPING - THE POSSIBILITIES ARE ENDLESS 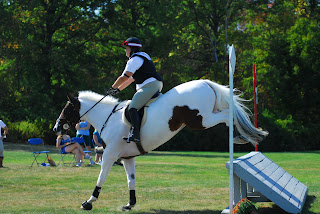 Its pony camp time and we all arrive... Sooo excited for a weekend of winter jumping... frigid temps, warm breathy barns and our bodies wrapped thickly in fleece, all in the company of eventers.
The horses are sound, strong and it just seems effortless - the season is just 4.5 months away! Giggling and dreaming... winter jumping in the company of horse girls... the possibilities are endless...
We stay up too late. Who wants to go to bed when there are courses to relive, a season to plan... Not one of us talk about the perfect dressage test... Winter jumping... summer cross country... ahhhhhh!
We get up early to get in some barn work, a Dunkin' run... then, let the jumping begin!
I'm still on the injured reserve - no jumping for me. Yet, I feel those turns and the power surging up over the jumps... It makes me whole. I love my pinto pony. Four and a half months, the possibilities are endless... Let the games begin!
Posted by Suzanne at 8:56 PM No comments:

THE GREAT CHIPMUNK HUNT OF 2011 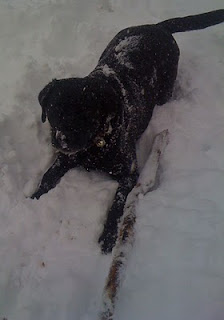 Ahhhh, VICTORY! What could be better than a late night ride in a quiet indoor. The night even more silent from the buffer of two feet of snow. The only breaks in the silence were Sugar's footfalls, an occasional "good girl" and a shrill shriek or two... yelling at Jonah to leave the jump poles alone.

He was as focused as a neurosurgeon performing a risky surgery... his gaze was steady - something was there. He knew it! Suddenly, a pounce and then, frantic digging for nothing that I could see. Every pounce brought a spook and spooks are what did my ankle in. I wanted none of it.

You see, Jonah is a Labrador Retriever. He was born to bring things to me - not hunt but to retrieve. Catchy huh? Tonight he was a hunter... the prey would be his. Yet, 45 minutes later - nothing!

After my ride I went over to the jump pole, Sugar trailing behind me. I picked it up and in one second, Sug jumped, Jonah pounced and a mouse squealed and died. I never saw the catch/kill... I just saw one very, very pleased dog holding a dead mouse and he smiled... Life, for Jonah, is indeed good!
Posted by Suzanne at 11:36 PM No comments:

Email ThisBlogThis!Share to TwitterShare to FacebookShare to Pinterest
Labels: Dog

Work has been busy... well, really busy! And that is GOOD! Busy means that I can continue to enjoy this life I've put together for myself at the level and intensity I enjoy.

'Cause it IS about money and; not money to be better than or to have more things but to be secure. Giving to good causes and to people in need makes me happy. Honesty requires me to also add, that I like it for myself too.

Yet, this nose dive back into workaholism is destroying my social life. I work til 8 at night and then tell myself that I'll get back on track tomorrow. Tomorrow I'll start to reconnect with folks, ride more and better... tomorrow when this project is done, when the client is happy and when I have more time.

And, yes, Sugar is dirty. she has been sporting a manure stain under her right buttocks -- crusty and smelly -- workaholism keeps me just so far away that it has remained there for two days... taunting me - "You are not a good horse mom... good horse moms do not leave manure on white bottoms."

Balance... ahhh, that word creeps in and is luring me back to health. Balance... Sug can have a dirty bottom once in awhile and I can complete a task well and it doesn't have to be perfect.

Photo credit - www.dexterpix.com
Posted by Suzanne at 10:41 AM No comments: