So in a confessional blog, it's ok to admit that I am a member (or could be a member) of many 12 Step Programs.  Given my predilection for addictive behaviors (yeah horses, Facebook,etc) and substances (chocolate, ice cream among the many), I try to avoid anything new that could trigger binging. 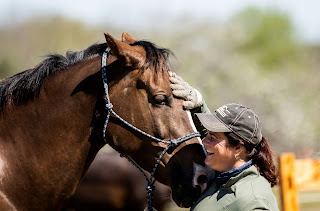 {{{OK, I did lose the Ted Lasso binging obsession and quite frankly really need an intervention.}}}

So when Tik Tok became all the rage, I avoided it like the plague.  I already waste so many hours "managing" Facebook pages, including my own, that I did not entertain getting the app.  So, folks would send me one or two that they thought I'd be interested in...  And yes, I would watch it and maybe the one after that but always caught myself if I went to a third. 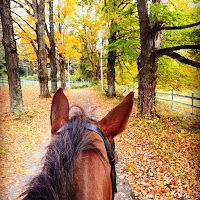 Then something called a Reel (Tik Toks) showed up on my Instagram/Facebook feed.  Here's another confession, I have been binge watching the horse ones...  Friesians galloping in the snow, barrel racing, young horses being broke, funny little bits from a dressage groom.  And, when the temperature hit a -5F, I couldn't stop...  folks - men and women -  with helmets, without helmets (had to stop judging them so harshly), jumping, galloping, loping...  just having fun.

Give me the cowgirl, cowboy and backyard Tik Tokker...  show me your joy, show me the ease in which you gallop and laugh.  Run delightfully through the fresh snow never once worrying about the potential for ice.  And show me your high horse and how you let them burn it off with a good run.

And Shanti, cooped up and confined due to a polar freeze, enjoyed her rider today.  When she kicked up her heels NEEDING to move, this rider thanked those Tik Tokkers and allowed her to move as she needed to move. I had my metaphorical cowboy hat, a fleece lined bomber's jacket and jeans glued to our big ole western saddle riding out the energy...  The only thing not metaphorical was the smile on my face and the feeling of freedom in my heart.

One last thing...  OK, I work hard at not judging but damn, wear a helmet.  This shit is dangerous.